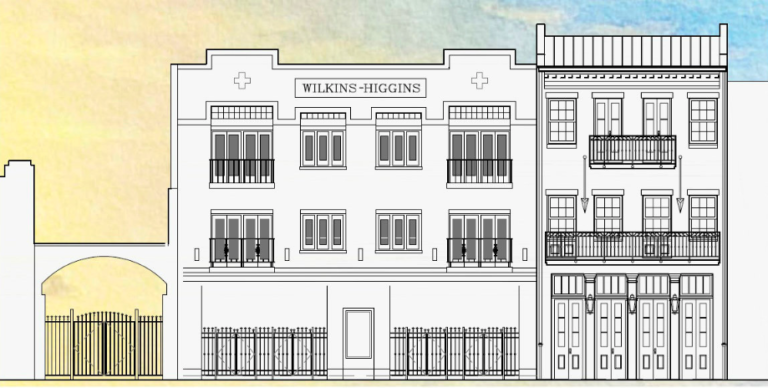 Renovations of the long-vacant properties at 358 and 360 Dauphin St. directly across from Cathedral Basilica of the Immaculate Conception in downtown Mobile are slated for completion – and occupancy – by the close of 2015. The $3 million revitalization project is the brainchild of Colin Ayres, chairman and chief executive officer of Ayres Lightweight Panel Systems, and the Australian businessman called the seven-year venture a true “labor of love.”

Once completed, the multi-structure development will boast an upscale restaurant or wine bar as well as professional office space on the ground levels and a total of eight high-end condominiums on the second and third floors. The completed condos – including two one-bedroom units and six two-bedroom units – will offer stunning views of the cathedral and Mobile skyline with several units boasting private rooftop patios.

“When these are finished, they’re going to be sensational. I just loved everything about this building from the get-go, and now I’m finally seeing it turn in to that something special without losing any of the history or charm that made me fall in love in the first place. It’s a truly remarkable project,” Ayres said.

Renovations of the long-vacant properties at 358 and 360 Dauphin St. directly across from Cathedral Basilica of the Immaculate Conception in downtown Mobile are slated for completion – and occupancy – by the close of 2015. (Courtesy Merrill P. Thomas Co. Inc.) Meanwhile, leasing agent Pratt Thomas with Merrill P. Thomas Co. Inc. is actively seeking tenants for the ground-level commercial spaces, one of which Ayres envisions being a restaurant given its existing infrastructure and location. That roughly 2,500 square feet on the first floor of 360 Dauphin also boasts a sizeable, brick- and wrought iron-accented courtyard fronting Dauphin that Ayres imagines capturing overflow patrons from the future restaurant in what he already calls “Jazz Alley”. “There is no question it could attract a quality crowd and become a true asset to the city,” Ayres said.

Thomas is also seeking as many as five professional office tenants for the first floor of the adjacent 358 Dauphin, and Ayres provided a brief tour of that structure’s basement which formerly housed a piano bar and was a rumored speakeasy at one point that local lore contends was once connected to the cathedral by a tunnel. (Click here to enjoy Ayres’ brief guided tour.)